Bharat QR Code, the latest initiative to boost digital transactions, will make use of QR codes system for payments across merchant outlets. The solution comes as a first of its kind throughout the globe.

As of today, QR code system is the easiest method of payment for users. However, different merchant outlets across the country use different QR codes. 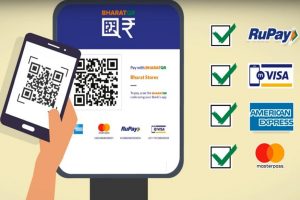 Bharat QR code aims at standardizing the QR code payment method through the country.
The prevailing method of payment necessitates a consumer to swipe a debit or a credit card and enter its PIN code to authenticate the payment. However, after the introduction of Bharat QR code, a consumer can simply open his or her banking app or BHIM app, scan the merchant’s QR code, enter the payable amount and enter the four digit code to authenticate the transaction. The amount will be directly transferred to the merchant’s bank account once the transaction is complete. In short, Bharat QR code will provide customers with an easy scan and pay option irrespective of their card type.
Both the merchant and the customer will receive instant notification after the payment is successful. The method would eliminate the need of PoS machines on a merchant outlet. This will help merchants in avoiding investments in PoS machines and the transaction fees charged by the banks for transactions through the PoS systems. The merchants will now just need to avail the Bharat QR code for their outlet and display it at the payment desk.

Bharat QR code will certainly remove a lot of discrepancies in using digital money for the citizens. Bharat QR code will eliminate all such roadblocks as it is directly linked to the bank. The payments will go straight to the merchant’s bank account through IMPS. Also, there is no limit to the amount of money the merchant can put in the bank.

Hence digital payments will be made much easier for both the parties after this launch.