In keeping with his push to steer India towards a digital economy, Prime Minister Narendra Modi on Friday,30th December 2016 launched a new e-wallet app, BHIM (Bharat Interface For Money) based on the Unified Payments Interface (UPI) named after Dr. Bhim Rao Ambedkar, to make it easier to transact online. The Aadhaar-based mobile payment application will allow people to make digital payments directly from their bank accounts. The PM also reiterated that digital transactions will be rewarded with raffle-like cash prizes from the government. 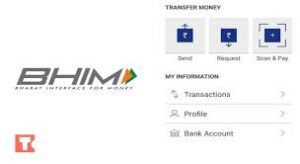 This App is initially available only on Android devices. Within 48 hours of being launched  BHIM made it to the ‘top free apps’ chart of Google Play Store in India, beating popular apps such as WhatsApp and Facebook Messenger registering the maximum downloads of any free Android app in India.

It is an app which enables you to make quick and easy payments and transactions using Search Results Unified Payment Interface UPI. According to the PM Modi, the BHIM app will allow the users to make cashless payments using their smartphones in a ‘fast, secure and reliable’ way. BHIM app is the Indian government’s latest app to push India towards a cashless or ‘less-cash’ society. 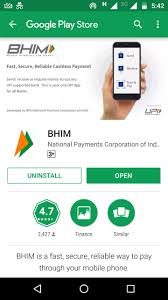 After downloading the BHIM app from the Play store, the user has to register his/her bank account and set up a UPI Pin for it. Your mobile number will then become the payment address and once you are registered, you can begin transacting using the BHIM app.

BHIM is developed by the National Payment Corporation of India (NPCI). BHIM is made in India and dedicated to the service of the nation. The BHIM app is being improved upon so that in time only your thumb will be needed to make a payment and eventually you will not be dependent on the internet, on smartphones; your thumb will be your bank.