In the wake of certain restrictions on money exchange norms by the government, chaos and rush at banks eased but the situation did not quite improve at ATMs as people were still seen waiting in long queues to withdraw valid currency notes for weddings, agricultural inputs, studies, medical treatment or simply to meet daily expenditure. People still have to stand in queues for hours at ATMs as most of the cash vending machines are either dysfunctional or running out of cash due to huge rush. There have been reports coming from different parts of the country about people being frustrated with shortage of cash at branches, leading to scuffle with bank staff and rioting at some branches. Also, the residents of villages are facing grave difficulty due to limited availability of valid currency notes at the rural branches of banks in the wake of demonetization. 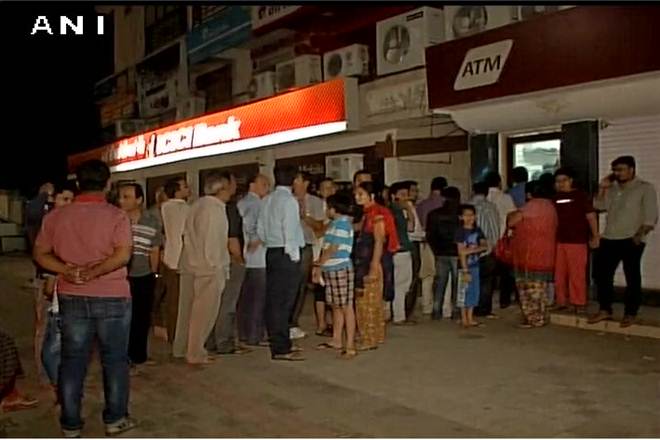 Besides, those having wedding in their families are still not able to withdraw Rs 2.5 lakh from their accounts, even after the relaxation announced by the Center five days ago. Banks said they have not yet received operational guidelines from the RBI in this regard. People said that despite waiting for hours, they were made to return empty handed. Many people were forced to take loans for the marriage of their children despite having sufficient money in their own accounts. People with their family members have to stand in long queues outside banks and ATMs daily for several days to collect a reasonable amount for the marriages. People have been to nearby towns but have not been able to withdraw sufficient money due to which they had to curtail the number of guests and cut down the marriage expenses. Demonetization has also deprived 70% trucks off the road as the transportation agencies have been deprived of the minimum Rs.20,000 cash per truck trip that is required as running expenses.

FeeGenie provides a solution to all these problems by facilitating the Smartest Fee Management System. It provides an integrated and managed system, which allows payment of fees online by Net Banking, Credit Cards or Debit Cards, without standing in long queues. FeeGenie is the fast growing fee management system and an easiest and simplest solution of the problem of shortage of cash. It is a fast and secure electronic alternative to traditional methods as cheques, money orders or bank transfers. It is one of the best ways to make payment online.